For the love of Miami Vice #3

Featuring Liam Neeson. He has blue eyes, the Kraken and a very particular set of skills. For the love of Miami Vice #2

Featuring Michael Des Barres, whom you might remember from another classic.

Murray of the month

This will be my look this summer.

Now that the weather is getting warmer and everyone is pining for summer to a nauseating extent, what would be more appropriate for a Murray of the month than ‘Meatballs‘  (1979)? If you went to a summer camp as a child, you’ll probably agree that this is pretty much what it was like, although none of the counselors was ever as cool as Tripper and the comedy was less scripted. While using words like ‘heartwarming’ and ‘good clean fun’  to describe a film would usually make me want to self-harm, Bill Murray saves the day and the film in the process, making this a watchable feel good movie. Never thought that would be possible but it turns out nothing is impossible for Bill. Coincidentally, the film turned Murray into an A-list talent and established him as a solid comedy actor and a leading man.

Emotions ran high as the winner of the short shorts competition was announced.

There is plenty of Murray-esque one-liners, lengthy monologues that seem at least in part improvised and even the supporting cast (because, let’s face it, that’s what everyone else in this film is) grows on you after the second or third watch. Ideal for that Sunday afternoon matinee when too much thinking would hurt your brain and you feel like enjoying a Murray classic. 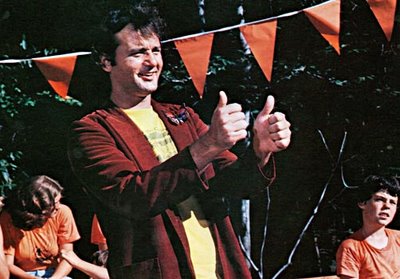 For the love of Miami Vice #1

Weekly appreciation for the music segments of Miami Vice.

Featuring Adolfo Quinones, whom you might remember from another classic.

What type of food did the team eat for Interview Project Germany? Did they request for creamed corn?

Here’s a link to present day Austin. The resemblance was more striking when he was younger, but that’s probably courtesy of the hair styling.

Tonight most of my reactions will be allergic.

All work and no exhibitions

Above: Jack’s ax from ‘The Shining’.

Currently on display at La Cinémathèque Française, Stanley Kubrick, The Exhibition examines the visionary director’s inspirations and processes, and delves into personal archives from his estate that contain everything from alternative film scenes and handwritten notes to actual props and equipment.

Trailer for the exhibition:

Have a look-see if you’re in Paris. And if not, here’s a link to the online component.